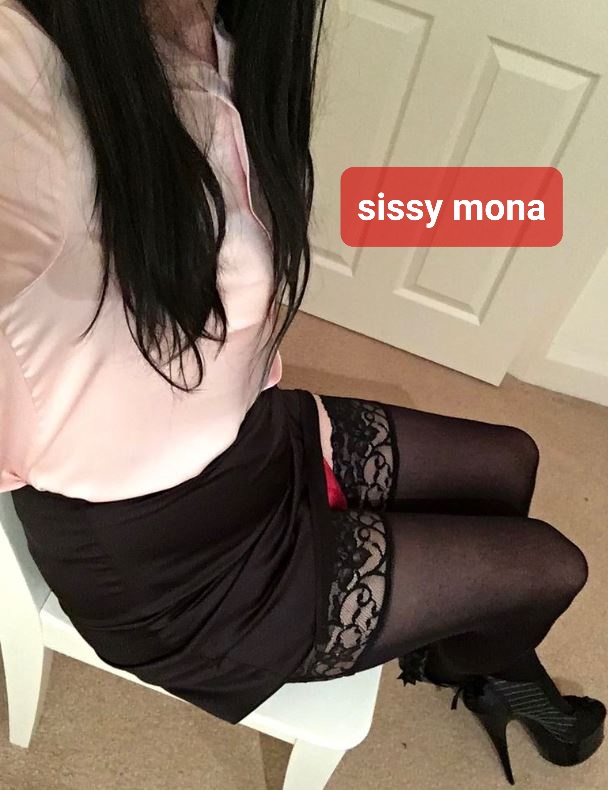 I was recently talking to a local sissy on FetLife, who practises clitty banding (elastration) as part of their kinky play. I knew a little about banding, but it’s not something I’ve explored. However, it made me realise that there might be a lot of sissies out there who are interested in it, or trying it out. After all, it’s a type of CBT and relates to chastity, emasculation and even castration. Hot, right? But it’s not without its risks. So, I asked sissy mona if she would write a blog about her experiences to help other sissies do banding in a more informed and less risky way. She kindly obliged.

i have always struggled with true chastity. i have an undeveloped testicle which means it never just sits in the cage endlessly, it will always eventually pop up and out of the ball ring. Once it does this, it is impossible to continue to wear the cage as it becomes quite uncomfortable very quickly and i must unlock it to readjust. This has been the case since i started getting into chastity back in 2013 or so, driven by my submissive side to chastise and sissify. i have tried many different cages, with smaller and smaller ball rings all with the same result. i have considered getting a Prince Albert piercing and PA chastity tube too, but i am also uncircumcised and don’t think it would be very comfortable long term either.

So when i happened to come across a thread about banding on a forum, i was intrigued, to say the least! Could this be a way that i could chastise myself for longer periods with absolutely no cheating either?? Was i dreaming?! This sounds ideal!

So, what is banding? The idea is to use elastic band(s) around the base of the penis, cutting off blood supply until the glans is left numb. Similar to when you sleep on your arm and it goes numb. The longer the band is left on, the longer the loss of sensation lasts, in theory. I read about other people using a sheep’s elastrator and the bands that are used with that. Yes, a tool designed for applying bands to sheep’s testicles so that they are castrated. A perfectly common tool in the farming world, not that i belong to it. Easily purchasable, relatively cheap, comes with the bands and delivered to my door by Amazon! So i ordered one… and there it sat for a while.

Until one day i was drunk enough to try it. Guided by a reckless online Domme, i drunkenly applied the band to my penis for the first time until she said i could take it off. And then another after that for another lengthy period. In hindsight and with a sober mind, this was all incredibly stupid, because i did it for so long that i was left completely limp for weeks (which was hot but scary) and it was nearly 3 months before i got the full sensation back, about half that before i could cum again. There was a period where i thought i may never get full usage of my penis again. Which i did find mildly arousing…..

So it was a success, but too extreme! Eventually, i began to play around with it some more, gained more experience and found a pattern that generally worked for me. I found that two applications, each 20-25 min long with a ~5 min break in between would leave me numb and unable to cum for around 2 weeks. A time frame that i was happy with that didn’t feel like i would damage myself permanently. So i continued to do this off and on for a couple of years, always enjoying the experience and the aftermath, not knowing precisely when i could next orgasm etc.

Until one time, when i was aiming for a month long chaste spell, i banded at the beginning and then before the feeling came back, i banded again. I lasted the month but the feeling hasn’t returned fully. i liken it to the lesser sensation that those that have been circumcised feel. Where before i found the sensation of exposing my glans in the shower overwhelming, now it doesn’t phase me anywhere as much.

So what do i think about banding now? i haven’t done it for a few months now but it still arouses me. i think i will do it again, hopefully i will be ordered to do so again, even though it may do me further damage. i know the risks now. i guess it is impossible to band regularly without long term damage and that has to be taken into consideration, if one is thinking of giving it a go. Having said that, banding my clitty until it was numb and limp was one of the hottest things i have ever done. It was left like i had been on hormones for a long time, shrunken and unresponsive. A sissies dream.

(Thank you, mona. I appreciate the time and honesty you put into this article)

I’m definitely turned on by CBT, chastity and feminisation devices. I’m not sure if I’m turned on by banding/elastration yet. I’ve not had the chance to experience it firsthand. Talking to mona has certainly made me confront some of my deeper feelings about this practice. I might write about this in a future article as I think the idea/potential of ‘permanent’ changes is an interesting subject for D/s relationships and practices. (And I like to confront my discomfort.)

One thing is for sure – the more I read about banding/elastration, the more aware I am that it’s high risk. I totally respect that some people want a permanent reduction in sensation. Banding enthusiasts often have castration fantasies too. So I’ll just say, if you’re not looking to lose sensation and function in your clitty forever, take care.

🖤 Did you love this article? Say ‘Thank you, Mistress’. Click here to buy me a coffee. 🖤

More resources on banding and elastration

Clitty/penis banding – short run down of what it is and risks:
http://t-vox.org/information/definitions/penis-banding

Testicle banding/elastration – this blog has some explanatory images and narration
https://www.cpony.com/home/veterinary/elastrator-castration-play.html

One thought on “Banding and elastration – a sissy’s personal experience”