Over ten years ago, sissy amanda tiptoed into my tweets…earned my collar and changed my life. This is the story of how our amazing D/s connection came into being, written by amanda. I ordered her to write it because I want to preserve the details forever, and I wanted her to tell me her side of the story.

So here it is…how a real-life D/s relationship sparked into life.

“As requested” by sissy amanda

As well as introducing me to a world of multiple sissy orgasms I have the little Aneros to thank for our paths crossing.

Each time, I’d be left breathless and in a state of disbelief at the sensations it caused, so I’d often read the Aneros forums afterwards or Google for reviews and blog posts about it. Just reading about people’s experience of the toy would give me shivers of arousal.

One Sunday, after another deliciously pleasurable Aneros session, I searched Twitter instead of Google. As I scrolled through the results, which consisted of tweets about people’s experiences and online sex stores posting links to buy the device, I saw a post from your @jessicasowner account. In that post, you were telling jessica to put her Aneros in her sissy pussy. I couldn’t read both sides of the exchange as jessica’s account was set to locked but I was able to click to your profile and read more tweets from you. I was mesmerised, turned on and aching to reach out to you.

But I didn’t. Your account only followed one person – jessica – and as I scrolled through your tweets I could see that you didn’t engage in conversation with anyone else. I didn’t have a non-vanilla Twitter account at the time so instead I bookmarked your Twitter page and I’d return to it regularly to read the one half of your dialogue with jessie which was publicly viewable.

In the few weeks that I had been reading your tweets as @jessicasowner I already knew I wanted to be owned by you, though I think I didn’t fully admit that to myself as we’d never even spoken so perhaps I had just built an elaborate fantasy in my head just like when a teenager gets a crush on someone and moments later they’ve imagined their entire life with that person.

But I had to find out, so I took a deep breath, set up a Twitter account with a picture that I found online but which was at least a similar body shape to mine, and nervously tweeted you at @mistressvirago with a request to follow you. You replied to say that since I had asked politely, that request was granted. I was over the moon! *smiling*

Fortunately for me, you were off work that week and we spent every evening that week talking via DMs. You encouraged me to purchase new stockings to replace my laddered pair and to send you a photo. I nervously bought those stockings in the supermarket so that I could hide them in my trolley and avoid eye contact at the checkout as I bagged them up along with my groceries. Then I slipped into them that evening, along with the mesh panties from my babydoll set, and took a photo which I mailed to you. That felt like a terrifyingly big step, as if I was willingly casting aside my shroud of anonymity, but it was also my commitment to you and to myself that I was serious about serving you. 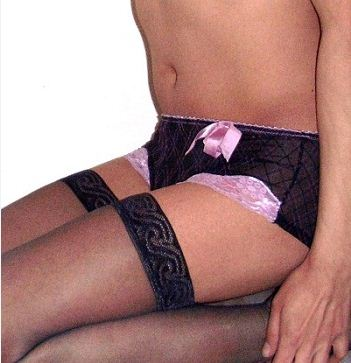 That is how we met, over 10 years ago. There is not a day that goes by that I am not hugely grateful that you gave me the chance when I first nervously reached out to you, and that you later took me as yours.”

I count myself lucky

I thank fate every day that sissy amanda had the courage to make herself visible to me. D/s connections like this are rare and precious. I’d encourage any submissive who senses they have a genuine affinity with a Dom/me to step politely into view. This doesn’t go against the dynamic. You’re merely enabling the Dom/me to see you. If they’re interested, they’ll engage with you and test you out, see if there’s good chemistry. You might want to watch and wait for a while first, build up your knowledge about them. It shows you’re a stayer when you finally do make contact.

And sissy amanda is definitely a stayer. In fact, I gave her the middle name of ‘Constance’ as she’s been such a constant, reliable, devoted submissive to me. Truly beyond my expectations.

If you have any experiences of making a special D/s connection, leave a comment as I’d love to hear about them.

🖤 Love my blog? Support it with a gift on WishTender 🖤
It’s a safe, secure, simple way to give.
I appreciate each gift I receive.
🖤
Click here to give
💜 Love reading about
FemDom/sissy things?

Click here to buy my book from Amazon
Kindle or paperback, from £2.99.